We are sorry to announce that we lost another long time member.

Bob Floyd was one of the founding  members of MCMGC. He was President and tournament chairman. Bob was also handicap chairman back in the days that you had to figure the handicaps by hand. Bob also was the first to start the website to have information about the club.

He loved his golf with all of the members. He got a Hole in One with the Monday group at El Prado. He spent every Wednesday helping and running the seniors group. Bob was a very strong family member that always played golf with the groups and Men’s club.

Bob will be remembered for not only his hard work but his humor and great attitude of not getting upset with all the problems that the tournament chairman’s deal with.

A great friend to all the members. Bob, You will be missed.

left us in a way that I am sure most of us being golfers would like to go. He had a heart attack on Hole #2.

his playing partners tried to revive him but had no luck.

Please keep visiting this page for updates as we get more info. 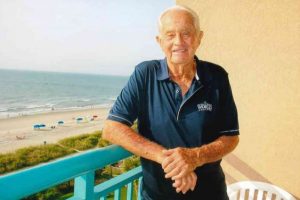 John spent most his childhood years at the beach, caddying at the golf course, walked his father’s race greyhounds and delivering newspapers. The family later moved to their home in Covington, Kentucky.

John served in the US Army during the Korean War from June 1951 to May 1953. He was awarded the National Defense Service and Good Conduct medals and was issued an Honorable discharge.

John married Virginia Anna Tasch on July 15, 1957. They moved their family to Southern California in 1961. There, John worked as an ironworker welding the structural steel framework of high rises. He was a member of the Iron Workers Union 433 until he retired in 1994. Virginia passed away in 2004.

John has spent the last thirteen years with his companion and best friend Eileen Centonze. They enjoyed retirement life traveling and watching movies together. He enjoyed working around his yard, swimming in his pool and golfing. John was from a family of golfers. His father John Joseph Sr., played amateur golf and was the Golf Pro at Bay Shore Golf Club in Miami Beach, Florida and later at Fort Mitchell Country Club in Kentucky. His father had two brothers, Ed and Jim who were golf pros and his Aunt Kate Brophy became one of the first female golf professionals in the U.S. It was obvious to all who knew John, of his passion for the game of golf. He was a member of Whittier Narrows Men’s Club followed by El Prado Men’s Club and most recently Marshal Canyon Men’s Club. John played in many amateur championship tournaments. John spent his final day doing what he enjoyed most, playing an eighteen-hole round of golf.